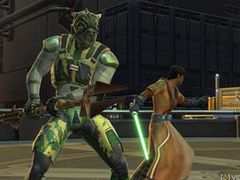 Update 1.2 for Star Wars: The Old Republic is now finally available after being delayed one month, and to keep users up to date with the changes BioWare has released a new trailer detailing the new Explosive Conflict operation.

Explosive Conflict features mercenary warlord Kephess who has taken over the planet Denova.

Users are tasked with assaulting his mountain-top war camp in a densely-wooded terrain and fight Imperial defectors and war machines.

Both eight and 16-player groups can play through the operation in Story and Hard Modes.

Full patch notes are available on the official website.