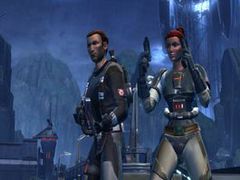 Star Wars: The Old Republic will launch in Europe on December 15, five days earlier than the previously planned December 20 date, BioWare has announced. The North American launch will go ahead on December 20.

“Star Wars: The Old Republic is a go for launch on December 20,” said Dr. Greg Zeschuk, co-founder of BioWare and general manager of the BioWare label’s MMO Business Unit. “We are extremely humbled by the surge of players who have joined us on this journey and participated in the Beta Weekend. Their participation has given us the opportunity to stress test the game and allowed us to tune the experience, ensuring that we deliver the smoothest possible MMO launch later this month.”