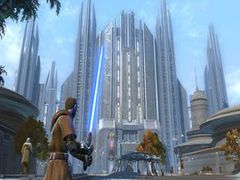 Users can finally pre-order BioWare’s MMO Star Wars: The Old Republic, according to the official EA website which has also confirmed the pre-order contents available with the game.

As listed, the Standard Edition of the game includes 30 days of game time, while the Digital Deluxe Edition will include a flare gun, training droid, holodancer, holocam, and STAP vehicle.

This news comes after a week of accidental pre-order leaks via online retailers.