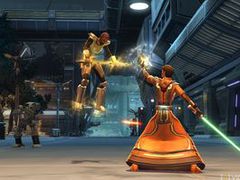 Relics of the Gree: Discover the mysteries behind the Grey Secant, an ancient Gree starship that has suddenly appeared over Ilum’s Western Ice Shelf. From February 12 to February 26, players can visit the in-game News Terminals located on Carrick Station or Vaiken Spacedock to begin their adventure. The Gree have promised advanced technology, including powerful weapons and armour, to anyone who is brave enough to aid them against an insidious foe who has taken control at the heart of their ship.

While the update is rolling out the game servers will be taken offline for around five and a half hours from 9:30am on February 12 until 3:00pm.