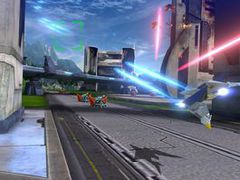 Star Fox Zero: The Battle Begins is an animated short coming this week

Get ready for the world premiere of Star Fox Zero: The Battle Begins, an animated short, which will be broadcast at 11pm BST on April 20 at nintendo.com.

Battle Begins was produced by Shigeru Miyamoto, Production I.G and WIT STUDIO, with the broadcast featuring US voiceovers.

If you’re not able to watch live, The Battle Begins will be made available on YouTube from 7am on April 21.