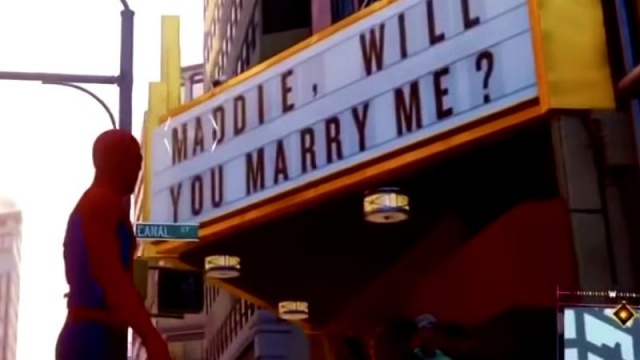 Spider-Man developer Insomniac Games has offered to remove an in-game marriage proposal that it included in the PlayStation 4-exclusive at the request of a fan.

Tyler Schultz contacted the former Resistance developer on Twitter back in May, when he asked if it would be possible to include the message 'Madison, will you marry me?' in the game somewhere as an Easter egg.

Insomniac agreed, and included the proposal in Spidey's open-world adventure on a movie theatre marquee. Pretty cool of them, right?

There's only one issue: Schultz broke up with his partner of five years some two weeks before Spider-Man came out. Ouch. According to a now-deleted YouTube video (via Kotaku) posted by Schultz, his girlfriend ended their relationship and has since hooked up with his brother.

Upon finding out this info, Insomniac Games' Jacinda Chew contacted Schultz asking if he wanted the message changed to something else via a future title update.

'That sucks! Want us to change the sign to something else in a patch? Any suggestions?' read the Tweet. Unfortunately, due to a bunch of mean-spirited commentators, the thread has now been deleted.

Spider-Man is out now on PS4, so be sure to read our review of you're still on the fence about picking it up.