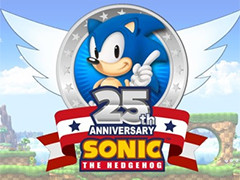 ‘Special’ Sonic The Hedgehog reveal planned for next week

SEGA is gearing up for a “special” Sonic the Hedgehog reveal at next week’s SXSW to help celebrate the blue blur’s 25th anniversary.

In a post on the event’s website, the show’s organisers revealed that Sonic’s creator Yuji Naka, Sonic Team head Takashi Iizuka and the franchise’s production heads will be in attendance on Saturday, March 19 to offer an “in-depth analysis of where Sonic came from and where he’s heading going forward.”

It concludes: “A special reveal will be made as part of the celebration for this anniversary milestone.”

While SEGA has yet to announce plans for Sonic’s future beyond 3DS platformer Sonic Boom: Fire & Ice, fans have speculated that the publisher may be preparing a remake of the original Sonic the Hedgehog to celebrate its 25th anniversary, with a release pegged for later this year.

The latest Sonic game, Sonic Boom: Rise of Lyric, arrived on Wii U in 2014 to largely negative reviews.