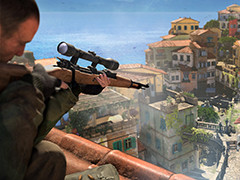 The publisher in charge of Sniper Elite 4’s physical release expects the game to sell around 200,000 copies in the UK on its first day.

Sold Out CEO Garry Williams discussed the ambitious target in the latest issue of MCV, describing the game as a “big hitter”.

“Sniper Elite 4 is triple-A,” said Williams. “We have our big targets and that’s us playing with the top tier. We do a lot of things in the middle-tier where we’re handling deals better than they [developers] would have without us.

“With this one, we’re into the big hitter territory. Rebellion has realised it can do more of the publishing process themselves. It’s great to see a developer looking after themselves both boxed and digitally in that sector. You can look at something like that doing 200,000 units Day One in the UK.”

Sold Out announced back in March that it had partnered with Rebellion to publish the physical PS4 and Xbox One versions of Sniper Elite 4 in the UK. The digital PS4, Xbox One and PC versions will be self-published by Rebellion.

It isn’t clear whether Williams is specifically talking about targets for the physical versions on day one or total unit sales across digital and physical. We expect it could be the latter.

Sniper Elite 4 is the first game in the series to be published physically by Sold Out on console. Previous entries were published by 505 Games on console, with Rebellion handling the digital PC release. The publisher has previously worked with Rebellion on the physical PC version of Sniper Elite 3, however, and on spin-off series Zombie Army Trilogy.

Sniper Elite 4 launches on PS4, Xbox One and PC later this year. A rival game from Lords of the Fallen publisher CI Games, Sniper: Ghost Warrior 3, is also due to arrive at some point in 2016.

Note: The original version of this article incorrectly stated that Sniper Elite 4 is the first game in the series to be partnered with Sold Out. This error has since been amended.