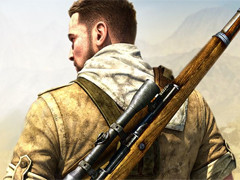 Sniper Elite 4 is currently in development at Rebellion, according to the LinkedIn profile of an employee at Chinese digital arts company ADIA Entertainment (pictured below).

Further details on the game, including a potential release date and platforms, are not revealed in the employee’s profile, nor is it clear when Rebellion plans to formally announce the game.

“To be honest we’re flattered that people are actively searching out for a new Sniper Elite title, and we certainly don’t mind being mentioned next to projects like Black Ops 3 and Unreal!” Kingsley said in a statement provided to us this afternoon. “However the person in question doesn’t work for Rebellion and we haven’t announced a new entry in the Sniper Elite series.

“Last year we celebrated the Sniper Elite series’ 10th birthday and 10 millionth sale, so our IP is still hugely important to both Rebellion and independent UK games development. We’re actually gearing up to announce a new Rebellion game soon, so expect to hear more from us before GDC!”

Sniper Elite 3, the most recent core entry in the series, released on PS4, Xbox One, Xbox 360, PS3 and PC in June 2014, with an undead-shooting spin-off, Zombie Army Trilogy, launching on current-gen consoles and PC early last year.

GDC, meanwhile, takes place in San Francisco between March 14-16. Could the studio be gearing up to reveal Sniper Elite 4 there?

ADIA Entertainment has previously collaborated with developers on multiple hit franchises, including Uncharted, The Last of Us, BioShock, Bloodborne and Hitman, and describes itself on its website as “one of the top names in game art production”.

The listing follows a similar leak from a Chinese developer’s LinkedIn profile this weekend outing the existence of Knack 2, which is reportedly being assisted by Taiwanese development company XPEC Entertainment.