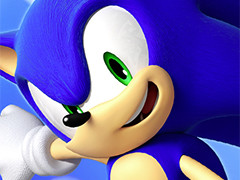 In a twisted turn of fate, SEGA says that it hopes Sonic will be able to help revive sales of Nintendo’s flagging Wii U with the release of Sonic Lost World this October.

Speaking in the latest issue of MCV, SEGA Europe president Jurgen Post explained that the console’s slow start “is a concern. But I certainly hope Sonic can help”.

“The Lost World might just be our best Sonic game yet,” he continued, “it is one of the games that can help them. I saw Nintendo’s briefing at E3 and it has a very strong line-up of games for Wii U. I think it’s helping people think that things might change.”

Post argued that Sonic was a “good fit” for Nintendo platforms, despite the rivalry between the two firms in the early 90s.

SEGA announced a three-title deal with Nintendo earlier this year, granting Nintendo the exclusive rights to publish and distribute three Sonic titles on its platforms. As well as Sonic Lost World, the deal also covers this winter’s Mario & Sonic at the Sochi 2014 Winter Olympics and an unannounced title.

And delivering a quality Sonic title is now “the number one priority” for SEGA, Post says.

“We started to make quality the number one priority. Even in the back catalogue: if we had Sonic games with low quality, or a bad Metacritic, we took them off the shelf. We focused on the core game – not offering all that back catalogue deals when a new game comes out. I think we’re seeing the results of that now.

“Sonic & All-Stars Racing Transformed had good Metacritic scores last year and the last few years the Sonic games have had better and better reviews,” he continues. “We’re on the right track with Sonic.”

Sonic Lost World launches exclusively on Wii U and Nintendo 3DS on October 18.