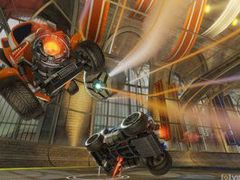 Rocket League is “100 per cent” coming to other platforms

Rocket League has proved a big hit since its launch on PlayStation 4 and PC, and as a result of its early success, developer Psyonix has now said the game will definitely be coming to other platforms.

However, Psyonix’s VP of marketing and communications Jeremy Dunham couldn’t specify which consoles the game will come to, or even when it will arrive in an interview with Gamezone.

“Now that the game is doing as well as its doing and people really want to see, we’ve focused on this,” he said. “We’re now in a position that we can expand our team. We are absolutely, 100 percent going to other platforms. What those platforms are and when we’ll come to them, I don’t know yet.”

Dunham also explained that the initial launch as a console-exclusive on PS4 and as a PS Plus game was not part of a deal with Sony, but due to the size of the development team.

“The number one reason we’re only on PlayStation and PC is because the team is small,” Dunham explained. “For the majority of the development, there were only 8 to 12 people working on Rocket League, and we’ve only very recently — in the last few weeks — added a couple of people to that count.”

When asked which platforms the game could expand to, Dunham remained vague.

“Nothing is off the table,” he said. “If the game can work on the platform and we can responsibly get that game working on a platform, we will never say never to any of the platforms that are current-gen. Anything is possible.”