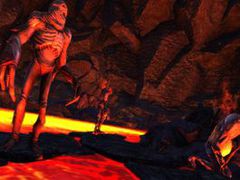 Rift going F2P would be a ‘large net negative’

Trion Worlds boss Scott Hartsman has confirmed the firm has no plans to convert its MMO Rift to a free-to-play model.

Speaking to Eurogamer, Hartsman stated the company is happy with how the game is growing on its current subscription model.

Taking on a free model, he believes, would end up hurting the game in the long run.

“One of the assumptions people make is you can just take a game and throw a switch and change the model. For starters, you’d have to decide that that would be a good thing, and I do not think it would be – that would be a fairly large net negative for RIFT and the RIFT community.”

Hartsman agrees that free-to-play attracts many users to a game, however it also transforms how an MMO studio designs the game as well.

“Take a free-to-play game or a social game, where the business is all about – the social games’ word for it is, ‘going whaling.

“The idea is you have a paying player subsidising the play of, potentially, dozens or hundreds of other users. And so you have to be willing to create a game that has the ability to make huge sums of money from relatively small numbers of people. Once you decide that you are going to enter the whaling business, it’s a different mindset and a different set of goals you’re designing for entirely.”

We recently spoke to the MMO’s design director Hal Hanlin about the newest patch update for the game, and the direction it is taking in light of the rise in casual players.

Both Rift and World of Warcraft have stated they are doing well without resorting to a free-to-play model. However it’s worth pointing out that Rift does regularly experiment with brief free-to-play stints by offering free weekends on occasion.