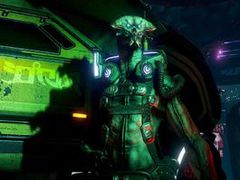 Accusations that Prey 2 was cancelled after Bethesda purposefully failed the game’s milestones in an attempt to acquire Human Head Studios for a lower price are “utter nonsense”, Bethesda’s marketing VP Pete Hines has said.

Speaking to Metro, Hines rejected accusations that Bethesda had maliciously thwarted the game’s progress, explaining that the sequel simply “didn’t turn out like we wanted”.

“I will simply say this: I don’t know what possible good reason we would have for spending millions and millions of dollars to create something to then suddenly arbitrarily decide, ‘No, we don’t want to actually make our money back off what we’ve put into it’,” he said. “Because we were footing the bill, right? We’re the publisher, we’re paying the developer. We’re putting all the money into it.

“I’m spending my own time taking trips up to Madison, creating brand, creating trailers, putting effort into it, taking it to E3, doing all that stuff. And to take all of that time and investment, and for the notion to be, ‘Oh yeah, for arbitrary reasons we decided to fail the milestones and are just going to wave goodbye to all that and never see any of it returned is the dumbest argument I’ve ever heard.”

Rumours of an attempted buy-out appeared in 2013, when a source “familiar with the situation” told IGN that “Bethesda decided to play hardball and buy the studio”.

“Bethesda denied further funding of the project, and started failing milestones,” added another, with a third source (seemingly from Human Head) claiming that Bethesda “thought they could bully [the studio] into a corner. It was one of few studios that could work with and improve id Technology. They wanted to buy us at a sweet price.”

“We don’t have any real predilection towards acquiring somebody or not,” Hines explained, rejecting the source’s comments. “We haven’t acquired anybody, that I can remember, in the last five or how many years. I think Tango [Gameworks, the studio behind The Evil Within] was the last acquisition. It’s not like we’re on some acquisition tear.

“We work with third party folks, like with The Elder Scrolls: Legends, like with Quake Champions. We have a perfectly good third party relationship with them. We’re gonna make the game, we’re not acquiring them, we haven’t failed milestones… again, it boils down to one thing and one thing only: we’re in the business of making games and we’re only going to put out and make games that we think raise to a certain level of quality.

“It’s no different to BattleCry, which isn’t anywhere. Isn’t being talked about, and it’s on hiatus because it also wasn’t rising to the level. Just like the Doom game that we cancelled.”

Bethesda officially announced Prey 2 had been cancelled in late 2014, 3 years after its initial showing at E3 2011.

A new game in the series, Prey, is officially due for release in 2017. The game is being developed by Dishonored developer Arkane Studios.