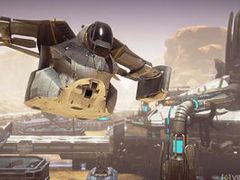 The collection of footage was originally shown at this year’s Game Developer’s Conference and is narrated by creative director Matt Higby.

Higby emphasises that as it is Alpha material, everything is subject to change before the game is shipped.

PlanetSide 2 is the free-to-play sequel to the 2003 title PlanetSide. No official release date has been announced. For more read our PlanetSide 2 interview