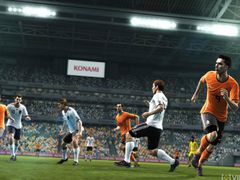 PES 2012 is due to be released on October 14 and is shaping up to be the best the series has seen in many years.

The publisher saw a 3.3 per cent increase in revenue during the first quarter of its 2012 financial year. Also due this year from Konami is bizarre action title Neverdead and the latest game in the Silent Hill series, Downpour.