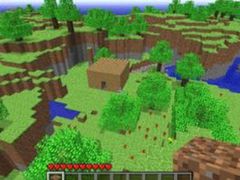 Notch has revealed his subscription-based title called 0x10c. The game, whose title’s pronunciation has yet to be revealed, will be “a Space game, and it’s quite ambitious”.

Players will be given a ship whose generator will produce a fixed amount of power. They will then need to choose what devices to use in order to maximise their generator’s potential.

For example, to use a cloaking field all other devices must be unplugged.

Users will also get a “fully functioning emulated 16-bit CPU” to both control the ship or play games on. It will also be possible to program the CPU yourself.

A monthly fee will be required to cover costs of emulating “all computers and physics”.

0x10c takes place in a parallel universe where the space race continued until 1988 when a “deep sleep cell” compatible with “all popular 16 bit computers” was launched.

“It’s now the year 281 474 976 712 644 AD, and the first lost people are starting to wake up to a universe on the brink of extinction, with all remote galaxies forever lost to red shift, star formation long since ended, and massive black holes dominating the galaxy.”

While there is no launch date as of yet, Notch plans to release the game in an early format and continue developing it while users play, similar to how he developed Minecraft.