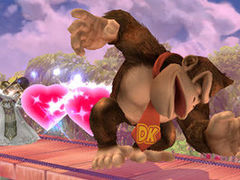 Nintendo has enlisted the aid of Namco Bandai to create the long-awaited sequel to Super Smash Bros.

Most of the staff from the Tekken series have been drafted in to squeeze out the game, alongside Tales series director Yoshito Higuchi and Mobile Suit Gundam: Extreme Vs director Tetsuya Akatsuka. That’s Namco’s contribution sorted, then.

Nintendo, on the other hand, are throwing down Smash Bros. creator Masahiro Sakurai as the game’s director.

The game was announced for 3DS and Wii U at E3 2011. In a statement, Sakurai said “it’s my personal belief that the only time a creative product really resonates is in that first moment when it’s actually in front of you.”

“With that said, I’ve realised that if we keep the new Super Smash Bros. title’s development structure secret, it’ll only create more and more speculation, and I won’t be able to develop the game with any freedom. That’s why I’ve decided to announce this news right now, even though it’s still very early on.”

“I would love to provide more information, but for now, I’m going to stay quiet until I have something solid to show you.”

“The project has just gotten started. Bear in mind that not only are we developing two titles simultaneously, but we announced the project before we even started actual development, so I’m afraid we will likely have to keep you waiting for quite a while. Please be patient.”

“Currently, the prototype prepared by Namco Bandai Games and Namco Bandai Studio’s special team looks pretty good, and it’s working great. In order to take advantage of the fact that there will be versions for two different systems, and to maximise and offer fun new gameplay elements, the entire team is going to work hard together. Thank you.”