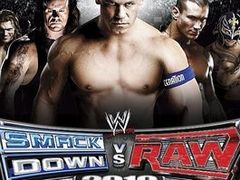 “WWE SmackDown vs. Raw 2010 will put the power of created freedom and shareable, user-generated content directly into the players’ hands, giving them the ability to control the action beyond anything ever witnessed in WWE programming,” said Brian Coleman, vice president, global brand management, THQ. “Combined with new Road to WrestleMania storylines, an impressive roster and other major franchise updates, including our new gameplay experiences on Wii and Nintendo DS, WWE SmackDown vs. Raw 2010 will be the must-have game for players on October 20.”

WWE SmackDown vs. Raw 2010 will introduce a new Create-a-Superstar Mode, including all-new 3D parts and improved graphical quality, said to allow players to create Superstars and Divas who are comparable in quality with their in-game WWE counterparts. A new Paint Tool will enable detailed creation of tattoos, logos and other unique designs, while a franchise-first Superstar Threads feature will let players create alternate ring gear for Superstars and Divas.

The game’s Create-a-Finisher Mode will now let players create acrobatic diving attacks from the top turnbuckle. In addition, the mode will deliver an extensive assortment of new moves from the front grapple position.

WWE SmackDown vs. Raw 2010 will also mark the debut of the WWE Story Designer. In this new mode, players will take on the role of the director to create and customise their own storylines and cutscenes, including the ability to select talent and scene locations, write their own dialogue, adjust camera angles, select from over 100 scene animations, determine talent emotions and more. Players will also be able to construct each night’s show card with matches, unique match stipulations, interference events and other story twists and turns.

For the first time in franchise history, the WWE Community Creations interface will enable players to upload their creations online, including created Superstars and Divas, story designs, finishing moves, entrance movies and highlight reels, and share them with others around the world.

WWE SmackDown vs. Raw 2010 will also include a number of key franchise updates. The WWE Training Facility will provide players with a franchise-first in-game tutorial. The game’s Road to WrestleMania story-based mode, introduced in last year’s game, returns with interactive cutscenes showcased within six brand new storylines, including a Create-a-Superstar storyline and a Divas storyline.

In addition, a robust talent roster will include more than 60 playable Superstars and Divas, many of whom will make their video game debut.

Relating specifically to the Wii version, THQ says the game will feature a button-based, simulation-style experience for the first time on the platform. The game will support the Wii Remote and Nunchuck, Classic Controller and the Nintendo GameCube controller. In addition, the game will offer a more robust move set, more match types, Create-a-Superstar, Create-a-Finisher, WWE Story Designer, Road to WrestleMania and more.

WWE SmackDown vs. Raw 2010 for Nintendo DS will also offer a more simulation-based experience, introducing streamlined controls that take advantage of the DS directional pad and eliminate use of the stylus. Players will earn a variety of collectible cards to gain power-ups and unlock content, including arenas, backstage areas and Superstar profiles. In Story Mode, players will take their created Superstars on a journey through all WWE brands, participating in training mini-games and interactive cutscenes while earning new moves and customisation parts along the way. The DS version will also feature a franchise-first Ambulance Match in which players attempt to lock their opponents inside an ambulance to attain victory.