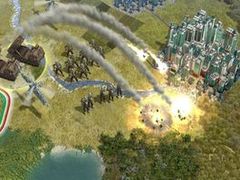 2K Games has announced the Double Civilization and Scenario Pack: Spain and Inca (which just rolls off the tongue, doesn’t it?) for the 9/10 treat Civilization V.

If you can’t work it out from the title alone, The Double Civilization and Scenario Pack: Spain and Inca adds a duo of new civilizations (Spain and Inca) and one new scenario.

Isabella I, integral to the unification of Spain in 1492 and Queen of Castile and Leon for three decades, rocks the world stage for the Spaniards. The new scenario is based around this time period:

According to the press release, “to the courts of England, France, and Spain come intrepid explorers, anxious to voyage across the Atlantic in search of a western route to China and the Indies. Will they find a new trade route and uncover untold riches from the Asian shores?” In all likelihood they’ll all make weak diplomatic pledges with one another and then get crushed underneath the player’s boot when they research Musketmen.

The Incan Civilization, however, gets Pachacuti, ninth ruler of the Kingdom of Cusco. He turned a tiny little kingdom into a massive empire, which should make him a perfect fit for the game.

The Double Civilization and Scenario Pack: Spain and Inca will be available for download from Steam today, with an RRP of $7.49. 2K could not confirm a UK price before going to print, but it roughly translates to £4.80.