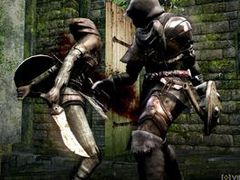 Dark Souls director Hidetaka Miyazaki has said that he doesn’t believe the player who claims to have completed the original game without taking a hit, instead believing it just to be an “elaborate rumour”.

Twitch streamer The_Happy_Hobbit posted a 4 and a half hour run of him playing through the entirety of the original game last month, claiming to complete it with “no death” and “0 hits taken”. He also claimed that the feat was a “world record”.

But speaking to Wired about the alleged feat, Miyazaki said: “I don’t believe the player who says he completed the original Dark Souls without taking a hit — it would be amazing but I think it’s just an elaborate rumour!

“Some of the stuff the community has done, collaborating on Twitch, or playing with Guitar Hero controllers, is incredible though,” he continued. “I’ve been very happy to see that kind of creativity. I don’t think I’d ever put in trophies or anything to instigate a particularly strange play style though.”

Now, I haven’t watched Happy Hobbit’s entire video so I couldn’t possibly say either way, but the recording is still

visible on Twitch if anyone wishes to prove Miyazaki right or wrong.

Dark Souls 3 launches on PS4, Xbox One and PC on April 12. The first UK review appeared this morning, awarding the game a 9/10.