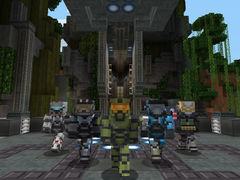 Minecraft has acquired Mojang and the firm’s Minecraft franchise for a massive $2.5 billion, the parties concerned have announced. The acquisition is expected to close in late 2014.

The Mojang team will join Microsoft Studios. Microsoft says its investments in cloud and mobile tech will “enable Minecraft players to benefit from richer and faster worlds, more powerful development tools, and more opportunities to connect across the Minecraft community”.

“Gaming is a top activity spanning devices, from PCs and consoles to tablets and mobile, with billions of hours spent each year,” said Satya Nadella, CEO, Microsoft. “Minecraft is more than a great game franchise – it is an open world platform, driven by a vibrant community we care deeply about, and rich with new opportunities for that community and for Microsoft.”

Mojang founders Markus ‘Notch’ Persson, Carl Manneh and Jakob Porsér will leave the studio to work on other projects.

“The Minecraft players have taken the game and turned it into something that surpassed all of our expectations. The acquisition by Microsoft brings a new chapter to the incredible story of Minecraft,” said Carl Manneh, CEO, Mojang. “As the founders move on to start new projects, we believe the high level of creativity from the community will continue the game’s success far into the future.”

Microsoft has also confirmed it plans to “continue to make Minecraft available across all the platforms on which it is available today: PC, iOS, Android, Xbox and PlayStation”.

“Minecraft is one of the most popular franchises of all time,” said Phil Spencer, head of Xbox. “We are going to maintain Minecraft and its community in all the ways people love today, with a commitment to nurture and grow it long into the future.”

Minecon will also continue in 2015.