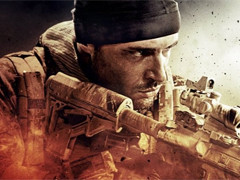 Medal of Honor is being taken ‘out of rotation’

EA is dropping the Medal of Honor franchise after sales of the latest title in the series failed to “resonate with consumers”.

“Medal of Honor was an obvious miss,” said EA’s COO Peter Moore during the firm’s earnings call last night (transcribed by Seeking Alpha). “The game was solid, but the focus on combat authenticity did not resonate with consumers.”

Moore claims that Medal of Honor: Warfighter, which released last October, was unfairly criticised by critics, who “gave the game scores which were, frankly, lower than it deserved.”

“This one is behind us now,” he continued. “We are taking Medal of Honor out of the rotation and have a plan to bring year-over-year continuity to our shooter offerings.”

“In the third quarter of fiscal year ’13, EA’s non-GAAP revenue was $1.18 billion, below expectations and guidance,” Riccitiello says. “The revenue shortfall was a result primarily of a miss with our Medal of Honor title, with stronger-than-expected sector headwinds for console packaged goods.”

Estimates suggest that the game sold around 300,000 units within its first week on sale in the US, a figure GamesIndustry.biz claimed was “significantly below analyst expectations”. The game received a Metacritic score of 55 on PlayStation 3 and PC, and 53 on Xbox 360.

EA Games label president Frank Gibeau admits that the publisher “missed” the mark with Warfighter, but that he remains proud of developer Danger Close.

“Look, we’re a hit-driven business, where it’s about what you can build in a certain period of time and really deliver for the marketplace,” said Gibeau. “And frankly, we missed on Medal of Honor, and we take responsibility for that.”

“I would be remiss if I didn’t point out that the rest of our studios have performed pretty well. We released 11 games this quarter, over 80 in the year, more than any other third-party developer. And we also deliver about 94% of our titles on time.

“And Medal of Honor, I admit, definitely overshadows these achievements, but we’re proud of our team overall. Now if you look at Medal of Honor as a specific case, it was really about a hit missing, but the rest of the studios have really performed and delivered on their goals.”

But without Medal of Honor, how does EA hope to fill the shooter void it leaves behind? Is the firm planning on releasing a new Battlefield game every year?

More information on Battlefield 4 is expected to be revealed in “about 90 days”‘ time.