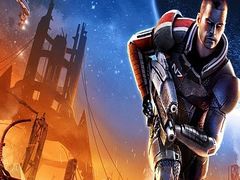 The Hollywood Reporter’s Heat Vision Blog has exclusively learned that Legendary Pictures has picked up the rights to EA and BioWare’s Mass Effect.

Mark Protosevich, the scribe behind I Am Legend is in talks to pen the movie, which will be produced by Avi and Ari Arad as well as Legendary’s Thomas Tull and Jon Jashni.

The project is said to be in the early stages of development.

Tull described the franchise as “ripe for translation,” adding he felt it had “depth, compelling characters and an engaging back story”.

Mass Effect the game takes place in the year 2183. Players assume the role of elite human soldier Commander Shepard and explore the Galaxy on the starship SSV Normandy.