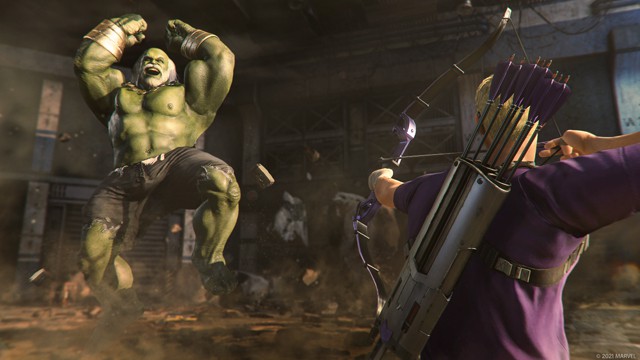 The operation brings the second new playable superhero to the game in the form of original Hawkeye Clint Barton and include a new story chapter featuring the hero going up against Maestro; an alternate-timeline version of Hulk with Bruce’s brains and Hulk’s strength driven mad in a post-apocalyptic future. The story will kick off where previous Operation: Taking AIM left things, with both Kate Bishop and Clint Barton’s Hawkeyes searching for SHIELD director Nick Fury.

The next gen versions of the game meanwhile will include enhanced visuals at up to 4K resolution for the Xbox Series X and PlayStation 5 and 1440p for Xbox Series S, faster loading times, farther draw distances and other enhancements. Furthermore, cross-play is also supported, so you’ll still be able to team up with your friends on Xbox One and PlayStation 4 (within the same family) to continue your adventures.

Both the next-generation upgrade and Operation Hawkeye: Future Imperfect will be free to all current owners of the game on March 18, and you can check out a trailer for the new DLC alongside the latest War Table broadcast and a next-gen trailer for the main game below. Marvel’s Avengers is available now for Xbox Series X|S, Xbox One, PlayStation 5, PlayStation 4 and PC and you can check out our original review here.