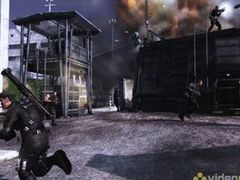 ‘MAG is what PS3 can do and few others can’ – Zipper

Ambitious 256-player FPS MAG “is what the PS3 can do and few others can”, developer Zipper Interactive has claimed.

Speaking to VideoGamer.com at a recent review event in London, senior designer Scott Rudi doubted whether it was even possible for PS3 exclusive MAG to be a multiplatform game.

“I don’t even know if it’s possible for multiplatform,” he said.

“We’re using so many architectural features unique to the PS3, like the Cell system, that I would be hard pressed to – and I’m not a programmer or anything – but from what I’ve been hearing, this is what the PS3 can do and few others can.”

So it might not be possible for MAG to work on Xbox 360?

“As a game player I’d love to see someone else try.”

The MAG review embargo lifted yesterday, but we won’t review the game until we’ve played the final version of the game on live servers. Expect it later this week.

MAG’s out in the UK this Friday.