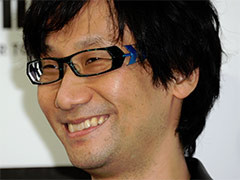 Lords of the Fallen dev to Kojima: ‘We’re hiring’

As rumours continue to swirl that Hideo Kojima is to leave Konami, Lords of the Fallen developer Deck 13 has appealed to the Metal Gear Solid director to join the studio as Head of Game Design.

“Dear Mr. @HIDEO_KOJIMA_EN In case you are currently searching, we have an open position as Head of Game Design @ Deck13,” the developer tweeted this morning. “Please get in touch.”

Rumours that Kojima is to leave Konami emerged earlier this month after it was discovered that the publisher had erased his name and the Kojima Productions logo from Metal Gear Solid branding.

It was later alleged that communications at Kojima Productions had been restricted and that multiple staff – including Kojima – were to exit the company following the release of Metal Gear Solid 5: The Phantom Pain this September.

“I want to reassure fans that I am 100% involved and will continue working on Metal Gear Solid V: The Phantom Pain,” Kojima said in a joint statement released by Konami. “I’m determined to make it the greatest game I’ve directed to date.”