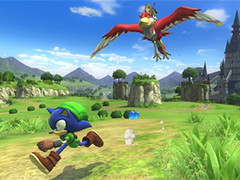 A free Zelda-themed Zone will be released for the Wii U version of Sonic Lost World tomorrow.

The Legend of Zelda Zone sees Sonic donning Link’s tunic and speeding through Hyrule Field, exploring dungeons and collecting rupees. You can see the first trailer for the new zone above.

The Legend of Zelda Zone was first teased by Nintendo back in December following the launch of the Yoshi’s Island Zone, a similar freebie that threw Sonic into the world of the little green dino.

The DLC is exclusive to Wii U and will not release for the Nintendo 3DS version.