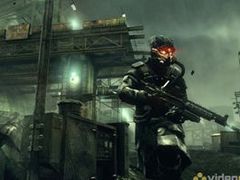 Killzone 3 is Sony’s 2nd All Formats No.1 this year, following LittleBigPlanet 2 in week 3, which showed similar week 1 sell-through to Killzone 3.

Killzone 3 beat Bulletstorm to the top of the UK All Formats All Prices chart.

There’s no doubt that Sony has got off to a great start in 2011, with two first-party exclusive titles charting at No.1 already. While sales of Killzone 3 perhaps aren’t as high as Sony would have liked, launching alongside the highly rated Bulletstorm wasn’t ideal.

Sony’s FPS is coming to the PlayStation 3. Despite a lukewarm reception…

Sony’s FPS is coming to the PlayStation 3. Despite a lukewarm reception…