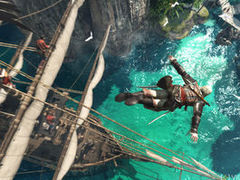 Microsoft has announced next month’s lineup of free Games with Gold, revealing that, from July, Xbox One users will receive two free games each month to celebrate the program’s 2-year anniversary.

From July 1-31, Xbox One Gold subscribers will be able to download 2013 hit Assassin’s Creed 4: Black Flag, with cutesy platformer So Many Me available from July 16-August 15.

PS4, PS3 and PS Vita users, meanwhile, should expect next month’s PlayStation Plus line-up to be announced soon.