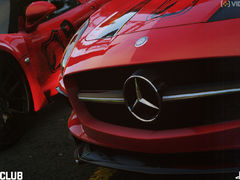 Sony has revealed the first trailer for DriveClub’s Ignition expansion pack, offering a closer look at the five new cars included in next week’s free DLC.

The DLC is being offered up for free to all DriveClub players as compensation for the ongoing server issues. A second Photo-Finish Tour Pack is also expected to be available the same day, again including 5 new cars, 11 Tour Events and 5 Trophies.

“Work continues on the server improvements as our priority, and everyone on the team who is able to work on this (or help) is focused exclusively on fixing the server issues,” Evolution said in its latest update.

“The other members of the team are working on game updates to make DRIVECLUB better for you and new packs to add more cars, tours and trophies to the game. We’re also working on new features like dynamic weather and replays as well as many other improvements to the game based on your feedback. We’ll give you an update on all of this soon.”

DriveClub’s weather update is still on track to release this year.