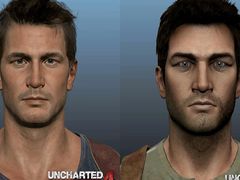 by VideoGamer.com Staff on Dec 8, 2014
No Comments

Uncharted 4: A Thief’s End looks stunning, but how much better does Drake look on PS4 than he did on PS3?

Naughty Dog has released a comparison image showing the differences between the two generations, revealing the improved eyes, hair and realistic skin shader found in the PS4 Drake.

The changes are pretty significant, so much so that without already knowing you were looking at Drake you may not even recognise him.

Check out the brand-new 14-minute gameplay video below.

The story will focus on Drake’s relationship with his mentor and friend,…

The story will focus on Drake’s relationship with his mentor and friend,…