Here’s how BioShock iOS compares with the Xbox 360 version 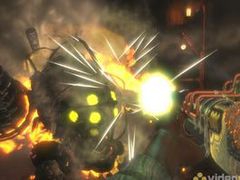 Wondering how BioShock iOS stacks up against its console counterpart? IGN has published a new video comparing the two side-by-side, offering a glimpse of what to expect from this year’s mobile port.

You can take a look at the video above, but despite a strong start (much of the underwater opening sequence holds up well), the iOS version begins to show its weaknesses when heading deeper into Rapture, with weaker lighting, flame effects and, seemingly, the removal of volumetric smoke.

Nevertheless, the iOS version still seems like a decent port – and if the idea of playing one of the most atmospheric games of the last-generation on the bus sounds appealing to you, who knows, maybe this could serve you well after all.