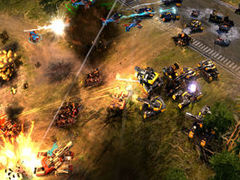 Has End of Nations been cancelled?

Sci-fi MOBA End of Nations appears to have been cancelled after the game’s website was taken offline and all reference to the game removed from publisher Trion’s website.

The apparent cancellation follows a reportedly difficult development, which saw the game’s development duties switch from Petroglyph Games to Trion Worlds. The game’s structure saw a huge shake-up, too, switching from an MMORTS to a MOBA.

“As we informed EON’s community last fall, internal development on End of Nations was put on hold in late 2013 while we evaluated potential paths forward for the title. We’re currently focusing the company’s energy and creativity on Rift, Defiance, Trove, ArcheAge, and some new projects that we will be revealing soon.”

End of Nations was described as a free-to-play tactical MOBA “where your success on the battlefield depends on the heroes and units you command and quick decision making in the heat of combat.”