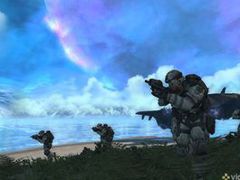 Halo: Combat Evolved Anniversary Edition will not only offer classic and modernised graphics modes, but also the ability to switch on support for 3D.

The new three dimensional visuals were demoed behind closed doors at gamescom last week, but the announcement was held back until Halofest this weekend.

Those wishing to play in 3D will require a display which supports the extra dimension and the appropriate eyewear. You’ll also need to be playing in the remastered visual mode; classic visuals don’t support 3D.

A short demonstration at gamescom suggested the 3D effect is no better or worse than what we’ve seen elsewhere, so those who like things to jump out of the screen should enjoy it, while those who don’t probably won’t.

Halo: Combat Evolved Anniversary will be released November 15 for Xbox 360.