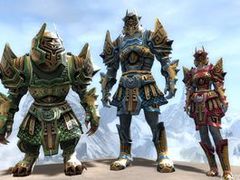 The news comes as expansion Heart of Thorns launches at digital and retail stores across North America and Europe.

“This has been a memorable year for ArenaNet and our Guild Wars 2 player community,” said Mike O’Brien, co-founder and president of ArenaNet. “We energised our fans in January with the announcement of Heart of Thorns as the first expansion to Guild Wars 2, and we’ve seen steady growth in our player base ever since.

“Our community is widely recognised as one of the best and friendliest in MMOs – many of our veteran players organised in starter zones to welcome new players the weekend we made the core Guild Wars 2 game free. We’re eager to see how our fast growing community continues to flourish, and we hope they’re eager to embrace where their Guild Wars 2 journey takes them next in Heart of Thorns.”

In addition to the seven million player accounts, more than 1.4 billion hours of player time has been invested into Guild Wars 2 since its launch.