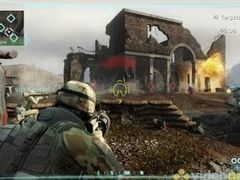 Microsoft’s Major Nelson has announced that this week’s Xbox LIVE Deal of the Week is the GRAW 2 Co-op Collection 2, which has been handed a 20 per cent price reduction for one week only. This means all Xbox LIVE Gold members can purchase the DLC for the reduced priced of 320 MS Points.

The DLC pack was released around a year ago and offers five new missions, plus nine maps – seven of which have been inspired by classic maps from Ghost Recon history and two which are entirely new.