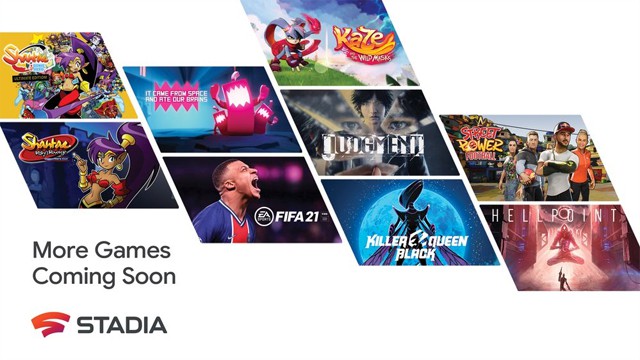 Google Stadia is vehemently refuting premature reports of its demise by announcing that the company has "more than 100 new games" coming to the cloud platform in 2021 from partner studios, despite the closure of their internal Games and Entertainment development division a couple of weeks ago.

In a blog post on the Stadia Community blog, (spotted by Engadget) the Google Stadia team showed off some of these titles, including Shantae: Half-Genie Hero Ultimate Edition to launch on February 23, FIFA 21 on March 17, Judgment on April 23 and Hellpoint later in the year alongside several other titles.

"These games represent just a sampling of the more than 100 games that will be added to the Stadia store for our players in 2021 to share, experience, and play with friends," the post reads and further goes on to note other big-name titles still expected to be coming to Stadia later in 2021 including Far Cry 6, Riders Republic and Hello Engineer.

Google announced they were shuttering their internal Games and Entertainment in-house development team earlier in the month, saying "Creating best-in-class games from the ground up takes many years and significant investment, and the cost is going up exponentially. Given our focus on building on the proven technology of Stadia as well as deepening our business partnerships, we’ve decided that we will not be investing further in bringing exclusive content from our internal development team SG&E, beyond any near-term planned games."

The closure also resulted in the departure of former Assassin's Creed producer Jade Raymond from the company, and the 150-or-so employees of the division—including former employees of Journey to the Savage Planet's Typhoon Studios—reassigned to new roles within Google.