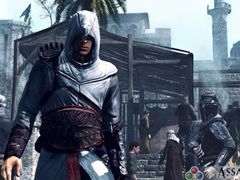 Going beyond the game

Ubisoft has plans. Big plans. Especially for Assassin’s Creed. The first step on the long road to world domination began last night in a tiny cinema in a Camden hotel, where the games giant screened the first of three episodes of Assassin’s Creed: Lineage, the new short film that combines computer generated imagery with live actors. Afterwards, we sat down with Yannis Mallat, CEO of Ubisoft Montreal and Ubisoft Toronto, the developers behind Assassin’s Creed, Splinter Cell and Far Cry, to find out just how big Assassin’s Creed can get.

Yannis Mallat: It is possible, absolutely. Assassin’s Creed is already the fastest selling new IP, two years ago, and that’s good. I often say that we should not sometimes get too imprisoned with specific objectives, especially when we’re talking about convergence. Let’s say if we were to have an objective like produce a movie about the Assassin’s Creed franchise for that date, we could have gone totally another way and that way would not have provided us with all the benefits that we have right now. We could have said, ‘I’m going to outsource that stuff. I’m too busy making games and do this and do that’, and then we would have missed a lot of things. First we would have missed the true convergence, which is to me making sure people who play the game, who consume the IP, are in the same world understanding more things. That we would have missed. We would also have missed all the knowledge we get trying to learn that field, trying to learn that trade, which is a trade Hollywood has been making for more than a century. Sometimes the value lies more on the path to get to the objective than on having an objective, if you know what I mean? Is Assassin’s Creed going to be the biggest brand or name in the video game industry? I certainly hope so, and I would say we’re doing everything we can so that it happens.

YM: It would certainly be too pretentious of me to try to predict the future. But I can certainly say there is no room any more for average or bad games, but there is still a lot of room for awesome games, and that’s what Assassin’s Creed is.

VideoGamer.com: What’s your opinion on Activision’s decision to price Modern Warfare 2 higher than normal? Did you ever consider doing the same thing for Assassin’s Creed 2?

VideoGamer.com: Did you ever consider pricing Assassin’s Creed 2 higher than normal?

YM: That question is going to have to be directed to the people who sell the games [laughs]. I’m the one making them [laughs]!

VideoGamer.com: Is the plan for Assassin’s Creed to be a trilogy? Will you expand it into other genres, like we’ve seen Microsoft do with Halo post Halo 3?

YM: Assassin’s Creed is a very clever and interesting brand that allows multiple opportunities. The whole concept of living ancestors’ memory through DNA and the Animus stuff, definitely allows for multiple opus to exist through the same big story arc. That’s all I can say for now.

YM: I don’t know where that came from.

VideoGamer.com: Is there any truth to that?

YM: If we were to officially dismiss some of the things that happen to be published or told on the internet… The content is being defined as we talk. I’m sure he didn’t say that. You may have read that on the internet…

VideoGamer.com: You’re still trying to work it out then?

YM: We’re pretty into it.

YM: Yes, why not? There’s always room for good experiences, no matter how you bring them to the people, through interaction devices or whatever. If it’s good we are probably investigating that. It could enhance the experience in a good way.

VideoGamer.com: So Natal and the like can work with any kind of game, core and casual?

YM: I don’t know. We are experimenting stuff, and if it does work and if it does make sense regarding the population of people who play our games, whether they’re hardcore, casual, whatever, we’ll investigate. That’s all I can say.

YM: Well, again, we may end up there. What the strategy is all about for now is making sure we learn and making sure we get that knowledge. Realising, making it happen, the convergence, is already helping us make better games. Already. I was telling people how the joint casting between movie project and game project helped us tremendously to achieve a quality level on the cinematic side of the game that was never reached before. This is because we’re working with movie people who have been doing that stuff for, again, more than a century. What’s important for us is to master everything and keep learning through projects like Assassin’s Creed: Lineage, and by the way you definitely may see other initiatives like this on other brands such as Far Cry, for example. Are we going to be ready one day to self produce a long feature? Maybe. But we certainly are not pretentious enough to say, ‘we can do a long feature movie… blah blah blah’. Baby steps. We do baby steps. Yes the baby is getting bigger, but it’s still baby steps.

VideoGamer.com: You mentioned Far Cry. Now that you’ve had time to reflect on Far Cry 2, do you consider it a success?

YM: Yes, absolutely. It’s been a success more in Europe than in the US. To us it’s a very solid brand that can still grow a lot.

VideoGamer.com: Patrick Redding has been quoted as saying the development team is committed to the Africa setting. Is it likely that Far Cry 3 will be set in Africa or are you considering alternative settings?

VideoGamer.com: You mentioned that Far Cry 2 was better received in Europe than in the US. Why do you think that was so?

YM: It’s a traditional European brand. It’s more encoded into the DNA in Europe than it is in the US. It’s a historical reason that allows us to come up and fill that gap and have the brand growth.

VideoGamer.com: Moving onto Splinter Cell: Conviction, the game was recently put back to February next year. What has the extra time allowed the development team to improve?

YM: The answer definitely is that Splinter Cell: Conviction will be a better game in February than any time earlier. The level of polish that we are achieving as we speak is definitely worth the wait. You know Ubisoft is committed to quality. We apply that to all our games. Splinter Cell is not excluded from that.

VideoGamer.com: We’re a multiplatform website, and we have many PS3-owning fans who would love to play Splinter Cell: Conviction. Do you have any message for them? Is there any hope for the future for them regarding the game?

YM: There is always hope.

VideoGamer.com: Does that mean Splinter Cell: Conviction might come to the PS3?

YM: I can’t predict the future. But it’s good to hear that people who can’t play Splinter Cell are willing to.

VideoGamer.com: Where did Ubisoft’s love affair with Tom Clancy originate from and why is Tom Clancy held in such high regard by Ubisoft?

YM: It’s a brand that’s worth a lot, you know? It’s a brand that allows for multiple stories to be told. It’s a fantastic brand. We got the video game rights in 2000, maybe. Since then, as you say, it has been a love affair, so we made sure we got everything.