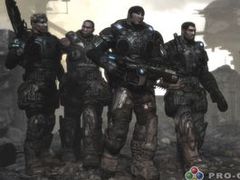 Gears of War Remaster coming to Xbox One – report

A remaster of the first Gears of War is heading to Xbox One, and it’s being handled by Brink developer Splash Damage.

Sources have told Polygon that the UK-based studio is handling development for the game, which has also posted a job listing for a senior character artist, stating “we are about to engage in a very well known and highly popular AAA title with next gen technology”. According to the report, multiplayer runs at 60 frames per second.

Polygon also says it has seen screenshots of the remaster showing off improved lighting effects and textures.

The rumour suggests that only the first Gears of War game will be getting the remaster treatment, after earlier rumours suggested the first three games would make their way to Xbox One, before Black Tusk studio head Rod Fergusson shot down the rumours in March.

E3 is less than two months away, so we don’t have too long to wait to find out what Black Tusk and potentially Splash Damage have been working on since taking over Gears duties from Epic.