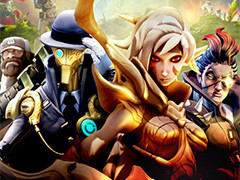 2K Games has announced Battleborn, a new IP from Borderlands creators Gearbox Software heading to Xbox One, PlayStation 4 and PC next year.

Described as a “next-gen hero-shooter”, Battleborn combines the elements of a MOBA with a first-person shooter, offering a 5 vs. 5 multiplayer game that “combines fast-paced first-person gameplay with the strategic team-based elements of games like League of Legends and Dota 2”.

As with a MOBA, players will start each match at level 1 before unlocking new skills over the course of the round, and sees them hunting the other team across a futuristic science-fantasy universe.

“If Borderlands 2 is a shooter-looter, Battleborn is a hero-shooter,” said Gearbox president Randy Pitchford. “As a genre-fused, hobby-grade, co-operative and competitive FPS exploding with eye-popping style and an imaginative universe, Battleborn is the most ambitious video game that Gearbox has ever created.”

More information on the game will be revealed throughout the month over at Game Informer.