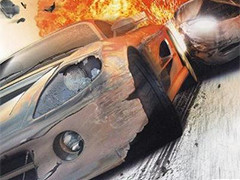 UPDATE: Three Fields’ co-founder Alex Ward has confirmed to Develop that the game will be a “spiritual successor to one of the Burnout series for PC, PS4 and Xbox One”, and that the developer aims to support virtual-reality headsets PlayStation VR and Oculus Rift.

More information on the studio’s sports game, meanwhile, will be revealed early next year.

Taking to Twitter last night, Three Fields revealed that its first game, a multiplayer sports game, would arrive in spring 2016. “Then we make a driving game,” it said.

“What sort of driving game you ask? A spiritual successor. Speed. Traffic. And Crashing. Lots and lots of crashing. #ShinyRedSomething.”

“Spiritual successor to which one though???” it continued. “The second, the third or the fourth one?? #decisions”

The original Burnout was developed under the working title ‘Shiny Red Car’, hence the hashtag. Three Fields’ later tweet, however, in which it asks which game in the series to base it on, suggests that the developer could be considering a return to Burnout’s earlier event-based structure, dropping the open world setting of the fifth game Burnout Paradise.

Ward and Sperry left Criterion in January 2014, before announcing that they would be opening Three Fields Entertainment two months later.

According to its website, the studio currently employs 9 people, almost all of which worked at Criterion on games like Burnout and Need For Speed.

Criterion, meanwhile, made it clear earlier this week that it had moved away from Burnout to focus on “newer, even better things”, confirming that work on its multi-vehicle new IP is still underway.

The most recent core Burnout, Burnout Paradise, launched on Xbox 360 and PS3 in 2008 before coming to PC one year later.