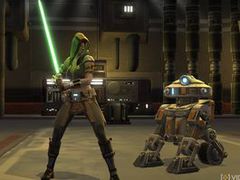 Drew Karpyshyn, who left BioWare early in 2012 to focus on his Chaos Born novels, has returned to the BioWare Austin studio.

During his 12 years as a writer at BioWare, Karpyshyn worked on the Baldur’s Gate series, Neverwinter Nights, Star Wars: Knights of the Old Republic, Jade Empire, Mass Effect and Star Wars: The Old Republic.

“As of this past week, I am back working at BioWare again!” wrote Karpyshyn on his blog. “For those who don’t know, I spent over a decade with BioWare working on many award winning and fan-beloved games like Mass Effect 1&2, Knights of the Old Republic and the Star Wars: The Old Republic Online MMO. A few years ago I left BioWare to focus on my Chaos Born novels, but now that the trilogy is finished, I’ve decided to come back into the fold. But for those of you who love my novels, don’t worry – I’ll still be writing more of those, too!”

He adds that his return to BioWare doesn’t mean the announcement of a new game project.

“I suspect a lot of folks are going to wonder if this means BioWare is about to announce a new project tied to my return,” said Karpyshyn. “The short answer: no. I originally came to the Austin studio many years ago to work on SWTOR and – at least for now – that’s what I’m focusing on again.”