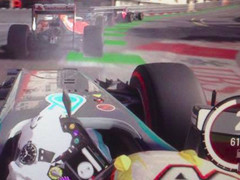 The first screenshots of F1 2015 have leaked online.

According to Codemasters, the screenshots were taken from a “confidential internal development email” distributed to development staff, and tease the first look at this year’s game.

Judging by the memo, Codemasters is aiming to get F1 2015 running at 1080p/60fps, with the game currently hitting around 45-55fps on PS4. “There are still plenty of optimisations to be made on both the CPU and GPU side and this is ongoing,” the email states.

The newsletter also suggests that the game has three months left in development, teasing that it could be due to release this summer.

The game won’t initially ship with the full line-up of 2015 cars, however, instead shipping with the “complete 2014 season as well as a field of Hybrid 2015 cars”.

The hybrid cars will then be replaced by the 2015 cars via a title update following the game’s launch. It isn’t clear whether this will be a free update.

“Broadcast” and “voice over” features are mentioned in the memo, too, although it isn’t entirely clear what they could be referring to.

“The work-in-progress images were taken from a confidential internal development email,” Codemasters said in a statement provided to VideoGamer.com this morning. “At this time, all content is subject to approval by Formula One Management and the teams.”