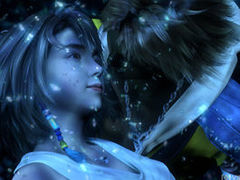 UPDATE: Final Fantasy X/X-2 HD Remaster will release in Europe on May 15 on PS4, Square Enix has confirmed.

European pre-order customers won’t receive the free desktop calendar, however. Instead, they’ll have their copy upgraded to include a free Steelbook (pictured below) again featuring artwork from Yoshitaka Amano.

Square has also detailed the new features available in the PS4 version, including enhanced graphics, cross-save compatibility and the option to select either the original or rearranged soundtracks from Final Fantasy X.

ORIGINAL STORY: The PS4 version of Final Fantasy X/X-2 HD Remaster will release in North America on May 12, Square Enix has announced.

An exact European release date has yet to be confirmed, but we’ve checked in with Square Enix to ask when it’ll be arriving over here.

Final Fantasy X/X-2 HD Remaster, which first launched on PS3 and PS Vita last year, bundles in the two PS2 classics with revamped HD visuals. The PS4 version will also include “system-exclusive features”, although the publisher has yet to confirm what they may be.