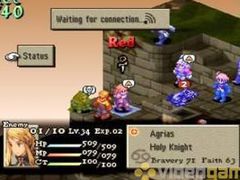 Final Fantasy Tactics: The War of the Lions is heading to both iPhone and iPad, arriving “between late-June and mid-July”.

Rather than the original version, which released on the PSone back in 1997, the App Store is to welcome the spruced up PSP remake, which includes improved graphics, hand-drawn cutscenes and improved localisation from Japanese to English.

The iPad offering will be made available after the iPhone version. In a blog post announcing the game, Square Enix stressed the word ‘separately’, alluding to a non-universal app.

Like the Final Fantasy III remake, which launched on the App Store last month, it’s looking likely that The War of the Lions won’t be universal. This means that dropping the cash on the game won’t get you both versions.

There’s been no mention of price, but Final Fantasy III launched at £9.99.

While I’m happy to wait a little longer for the iPad version, it concerns me that I’ll be snubbed out of the iPhone version in the process. £9.99 is at the upper end of App pricing, and with that kind of price tag, I feel entitled to both versions.

Final Fantasy Tactics: The War Of The Lions

Final Fantasy Tactics: The War Of The Lions