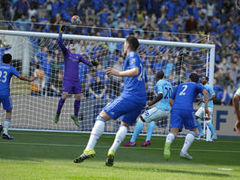 FIFA 16 holds on to No.1 despite strong LEGO Dimensions launch

FIFA 16 is the week’s No.1 video game, holding on at the top despite a 74 per cent drop in sales week-on-week.

EA’s sports franchise even managed to outpace the launch sales of LEGO Dimensions, which itself comfortably became the year’s biggest Toys to Life launch – ahead of both Disney Infinity 3.0 and Skylanders Superchargers.

LEGO may be the year’s biggest Toys to Life launch, but in terms of the sector as a whole it becomes the third best launch behind Skylanders Giants and Skylanders Swap Force.

Elsewhere NBA 2K16 charts at No.3 with sales up 53 per cent over last year’s launch and becoming the biggest week 1 seller in the series to date.

Destiny: The Taken King and Forza 6 are down to No.4 and No.5 respectively, followed by 3DS title Animal Crossing: Happy Home Designer at No.6.

Activision’s heavily criticised Tony Hawk Pro Skater 5 doesn’t quite make the triumphant return to the charts that the publisher would have hoped for, though, starting life at No.12 and looking unlikely to perform well over its lifetime.

Konami’s PES 2016 also appears to be struggling despite a positive reaction from players and critics, dropping out of the Top 10 to No.11.

We could see a new No.1 next week with three big titles hitting stores over the course of the next five days. Rock Band makes its return, benefiting from being compatible with previously purchased DLC. Also new is Uncharted: The Nathan Drake Collection from Sony and Activision’s Transformers: Devastation.