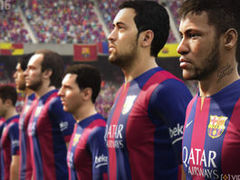 FIFA 16 accounted for almost one-third of all physical game sales in the UK last month, according to industry mag MCV.

2.67 million boxed games were sold in the UK between August 23 and September 26, the magazine reports, with FIFA 16 coming out in pole position. Metal Gear Solid 5: The Phantom Pain was the second best-selling game in September, with Destiny: The Taken King landing in third despite its strong digital focus.

PES 2016 failed to make the top 10 altogether, however, despite launching on all platforms and releasing one week before FIFA. Konami has yet to announce sales figures.

The stat suggests FIFA 16 may have sold close to 1 million physical copies in the UK during its opening month, although EA has yet to reveal actual sales figures. Physical week one sales were said to be down 7% on last year’s FIFA 15, however.