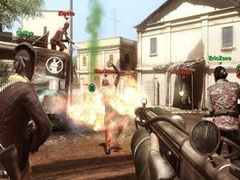 Third-quarter sales came in slightly higher than the guidance of approximately â‚¬500 million issued when Ubisoft released its sales figures for the second quarter of 2008-09. This has been attributed to a variety of factors, notably the solid sales performance of key franchise titles.

Other highlights included Shaun White Snowboarding which was the quarter’s No.1 sports game in the US and recorded 2.3 million unit sales worldwide. Ubisoft also pointed towards the ongoing success of the casual games label, notably the “very robust performance” of the Imagine range, including Imagine Teacher and Imagine Wedding Designer.

Sequel to the successful 2004 PC FPS.

Sequel to the successful 2004 PC FPS.