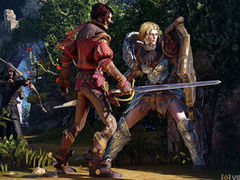 Fable 4 not in development, Lionhead’s focus to remain on Fable Legends ‘for the foreseeable future’

Fable 4 still isn’t in development at Lionhead, the studio has reiterated, telling fans that its focus will remain on free-to-play spin-off Fable Legends “for the foreseeable future”.

Lionhead has been denying plans to develop Fable 4 since August 2013, when it confirmed that “Fable Legends is the only Fable core game in development, and we have no plans to make a sequel to Fable III”.

Fable Legends, of course, is a free-to-play online multiplayer game due to arrive on Xbox One and PC later this year that pits four heroes against a dangerous villain. The game has been playable in closed beta since October 2014, although an exact release date has yet to be confirmed.

Rise to power in the third game in the fatasy RPG series.

Rise to power in the third game in the fatasy RPG series.