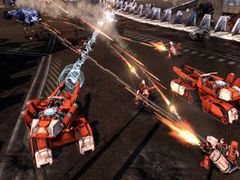 End of Nations: Why free-to-play is the best strategy

End of Nations is the upcoming MMORTS from the publisher of Rift, and we got the chance to speak with the game’s executive producer David Luehmann about the free-to-play game and why Massively RTS titles are such a rarity in the genre.

Q: Could you give a run-down of what End of Nations is for those not aware?

David Luehmann: End of Nations is a true MMORTS: an exciting real-time strategy game with all the heart-stopping action and compelling strategic gameplay you’ve come to expect of an RTS, plus selected elements of modern massively multiplayer online games to expand and revolutionise the RTS genre: unparalleled epic scale, an ever-evolving set of missions in a massive persistent world where your actions influence the outcome of global conflict, and robust customisation options.

Q: Why do you think the MMORTS genre is such a rarity?

DL: I think it’s new and outside the box of what’s safe and common in the industry. There are technical challenges and design challenges that serious effort to overcome. Trion and Petroglyph are uniquely positioned to take on those challenges and I think we’re building something that will really resonate with fans of the strategy genre.

Q: Do you imagine we’ll see this genre grow in the wake of End of Nations?

DL: I sure hope so! If that happens it means we’ve been doing something right! I can’t think of a more flattering result.

Q: Can you talk about the different classes involved?

DL: There are two factions in the game, the Liberation Front and the Shadow Revolution. These two groups are similar only in that they are committed to the defeat of the Order of Nations. In every other regard the two groups are violently opposed to each other.

Within each faction there are two unique classes. For the Liberation Front those are the Spartan and Patriot classes. All Liberation Front armies favour large powerful units with lots of armour and lots of firepower. The Spartan class is the heaviest of all, outfitted with the biggest tanks and biggest guns. The Patriot class balances the faction, offering moderately heavy units and adding a strong defence with the ability to repair and heal units on the battlefield.

The Shadow Revolution fields more of a high-tech army that favours lighter faster units employing many unique unit abilities such as stealth and jamming technologies. Within the faction we have the Wraith and Phantom classes. The Wraith class is the epitome of fast and light with very few heavy units but a variety of fast moving hard hitting, but thinly armoured units. The Phantom class compliments the Wraiths will bigger guns, lots of stealth capabilities and longer ranges to hold off heavier enemies.

DL: For a premium strategy game like End of Nations, we really want to bring as many players as possible into its massive-scale strategic warfare. And as we looked at the enormous battles and huge persistent world, we realised that the success of End of Nations would be driven by having thousands of players from around the globe battling daily in the world’s biggest strategy game, and that is why it made perfect sense to be free-to-play!

Q: One thing End of Nations is touting is its ability to support 50 player co-op and multiplayer. How exactly does that work, and how do you keep it from becoming chaotic?

DL: It works in two ways. The first is technical, by employing a pure client server design, unique to this genre, we can offload much of the simulation work to the server while the clients focus on the graphics side. The second is from the design side, in the larger scale missions and maps the battles take place on huge maps. Winning requires player coordination and with over 50 players communication can get chaotic. To help facilitate coordination we team players up into logical groups which helps manage the flow of battlefield chatter that takes place. That said, it’s still possible for everyone to smash into each other in a giant battle and while it can be chaotic, it’s damn fun!

Q: The multiplayer is objective-based. What game modes or objectives are currently planned?

DL: You are quite right, most multiplayer matches are objective based with game modes that focus on area control, resource control each with time components. There is also assault – attack based modes which are more ‘straight up fighting’ types of matches as well as last man standing types of matches. We have a couple more in the game now and a few more planned but I don’t want to reveal all of them just yet. 🙂

Q: What kinds of items can be purchased with real money?

DL: We are very sensitive to the concept of pay to win. In End of Nations at similar experience levels, player skill will determine the outcome of battles, not player wealth. From that precept the monetisation elements must adhere, therefore anything you purchase in the game with real money with focus on vanity or convenience item type. Examples being skins, or boosts the increase the players experience or wealth generation rates.

Q: Can players go against other members of their faction?

DL: Right now that isn’t part of the plan, but I like the idea – I’m certain we can craft scenarios when this would work well.

End of Nations is expected to be released 2012 on PC